This article describes the research activity conducted by Dr. Leonardo Bassani in the Geography section of DISCI Department of the University of Bologna, in collaboration with SAL Engineering.

The traditional techniques in bathymetric surveys like multibeam, singlebeam or LIDAR are really expensive and require complex data processing. In the ‘80 and the ‘90, when the first multispectral satellite mission started to collect multispectral images of earth and sea surface, some researchers tried to calculate the bathymetric profile in shallow water using satellite multispectral images. The development of different algorithms and image processing methods led to the birth and success of the discipline called Satellite-Derived-Bathymetry (SDB). The results were good but the big issue was the low resolution of satellite images that prevent the production of high quality cartography. 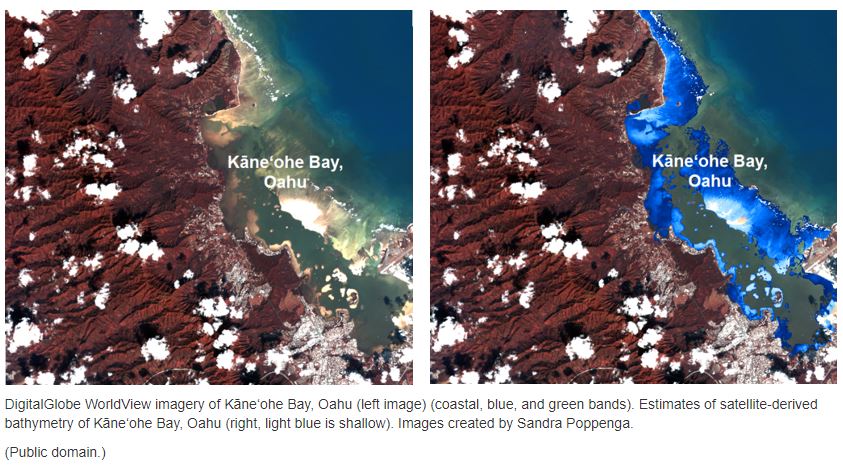 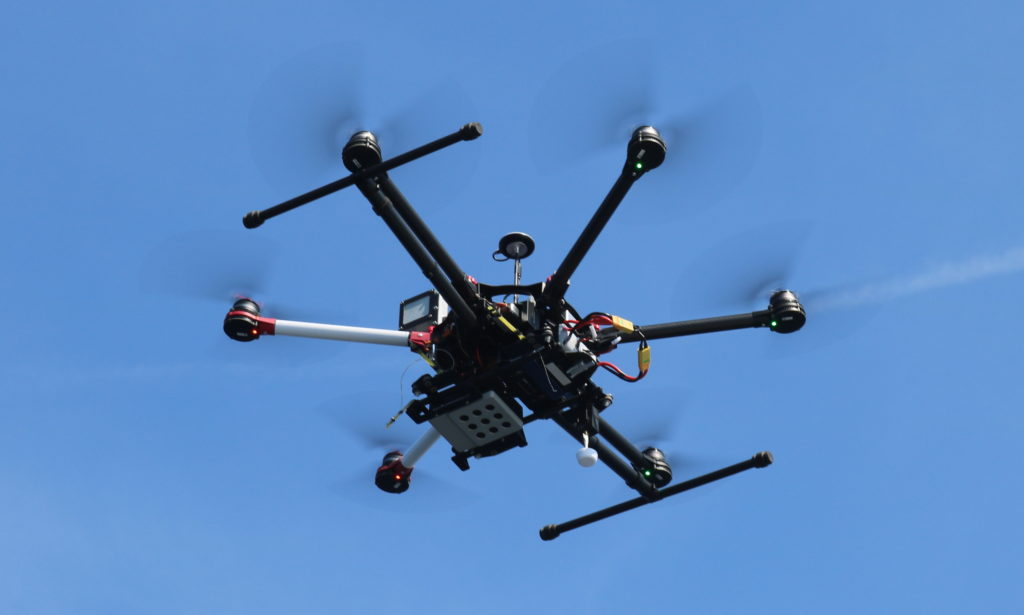 MAIA WV multispectral camera is equipped with the same wavelength intervals of the DigitalGlobe WorldView-2™ satellite. The purpose of this research is to apply the algorithm used for the satellite images to extrapolate the 3D model of shallow water seabed using MAIA WV multispectral camera, and produce seabed cartography with high resolution, keeping the costs of the operations below the threshold of a traditional bathymetric survey. The research was conducted on May 27, 2019 near La Ciotat, a french commune in  Bouches-du-Rhône department, 40km east of Marseille. The camera was mounted on a DJI-S900 UAV through personalized support and three flights were performed in different time of the day to evaluate the various condition of sun light. Approximately 300 images per flight were taken. The radiometric correction of the MAIA WV images was performed with the ILS (incident light sensor) mounted onboard UAV. The images were taken from 100 m above the sea surface with a ground sampling distance on the sea surface of  ~5cm. MAIA WV camera takes images of  1.2 Mpixel in each band.

A difficult part of this research was the operation of geo-referencing and merging the images to create the mosaic of water surface. 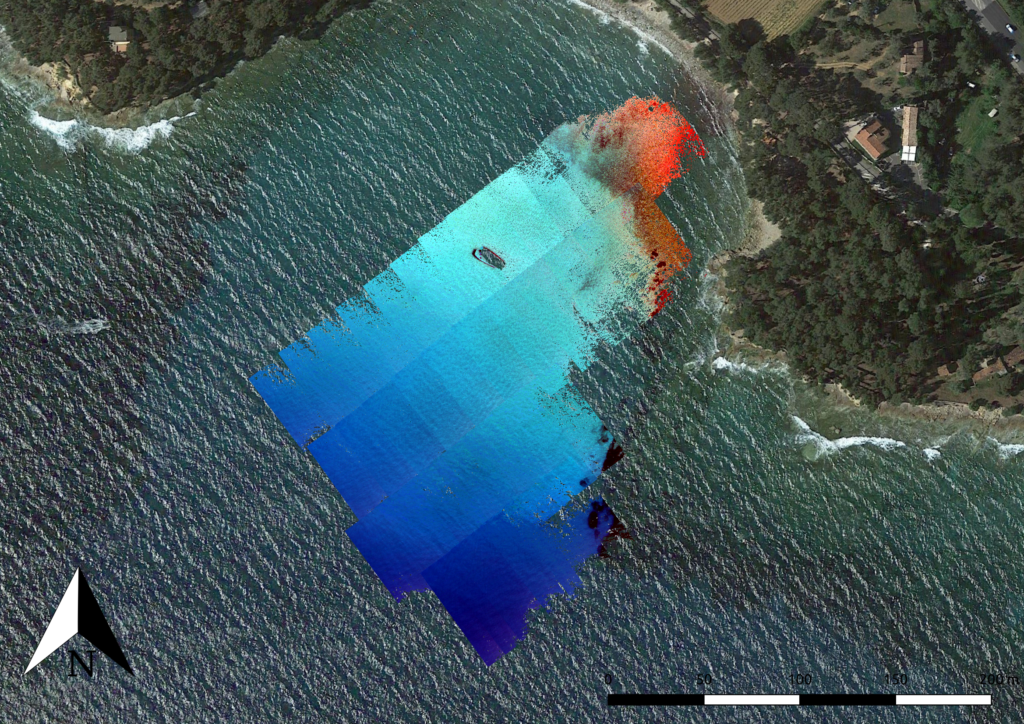 It was also necessary to correct the sun glint: this issue was caused by the sunlight reflection on the water surface that produce a saturation of reflectance value in some pixels of the image. Problems related to geo-referencig and mosaicking force us to apply some approximation in the model. The images was georeferenced using the GNSS data acquired by the antenna mounted onboard UAV: these coordinates was not really accurate and this was the cause of some important error in planimetric positioning.

To avoid this error, where the seabed morphology was clearly visible, some images were manually georeferenced using as a reference some target located on the shoreline: this process can reduce the positioning error especially in the area near the shoreline. 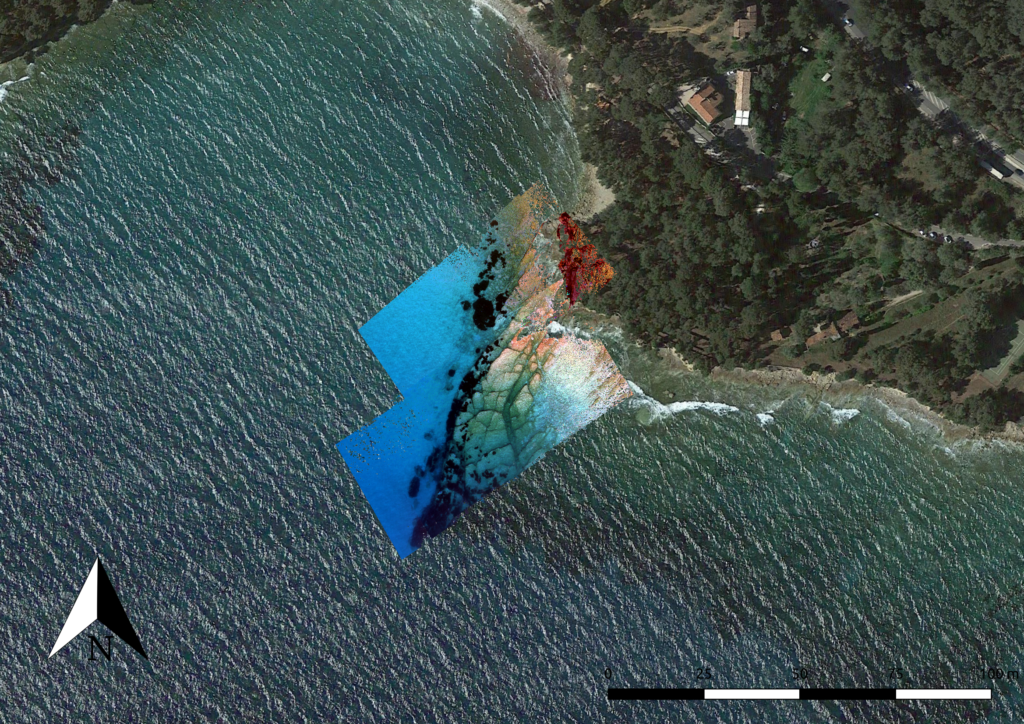 The final model was created at a resolution of 50 cm to fit the model to the reality and to smooth the error.

The chosen algorithm to derive the bathymetry was developed by Stumpf (2003). This algorithm use a two band ratio equation where the different absorption of the bands in water is exploited to derive the water depth. The Stumpf algorithm requires some control point to scale the ratio to depth. Due the different seabed morphology it has been decided to split the model in two part, an area of open sea in the middle of the bay and an area near the reef where the seabed features are clearly visible.

Images have been georeferenced using data derived from GNSS positioning system onboard UAV. Given that images were taken 100 m above the water surface, it derives that images are georeferenced on the surface of the sea, which is assumed to be flat, horizontal and at the orthometric altitude equal to zero, a choice that we know to be remarkably approximate.

This is not correct also because the images return the sea bottom actually and not the water surface. To correct this issue an iterative georeferencing processing in GIS has been implemented. Then, it has been applied the Stumpf algorithm on the mosaic to obtain the depth model, and then, using this model, the images are re-projected on the sea bottom considering the distortion caused by the water refraction. Finally, with this new corrected images it has been re-created the mosaic and re-applied the algorithm to obtain the final model.

As mentioned above, the model has been splitted in two areas, the ratio algorithm has been applied in both the areas using different combination of bands (Blue/Green, Green/Blue, Blue/Orange). Green/Blue is found to be more suitable for estimating bathymetry in the open sea, while Blue/Orange was more suitable for estimating bathymetry in areas with less depth and with a more diversified morphology in the seabed.

We can see an offset in absolute value (A.V.) between our model and the reference model of ~0.34 m in ratio Blue/Green and Green/Blue with a standard deviation (SD) of  ±0.23 m. If we consider the resolution of our model (50 cm) we can assert that this is a good result (we must not forget the error caused by low accuracy GNSS positioning) for estimating bathymetry in shallow water.

In the other area, where we can see the irregular seabed morphology and some seagrass meadows, the results are a little worse. Here the best result is from Blue/Orange ratio and we can see an A.V. offset of 0.56 m with a SD of  ±0.46 m. We must consider that the seabed heterogeneity emphasize the GNSS positioning error.

This result can be observed even in the seabed profiles extracted from the depth model. There are issues in the areas of shallow water and where we have some seagrass meadows. The algorithm is more sensible to the bottom albedo where the water is shallow and also where the seagrass causes some absorption variation.

In conclusion, we can asset that is possible to use MAIA WV multispectral camera for bathymetric survey. This methodology must be implemented in future and a lot of errors can be fixed but we are sure that this is an important step to the develop of this technology.