Applications of MAIA for environmental monitoring

Applications of MAIA the multispectral camera for environmental monitoring

The potential offered by RPAS in environmental awareness, prevention and monitoring is related to the possibility for sensors to fly over areas of interest. Remote Sensing in the environmental and territorial sector has undergone the first strong development with the NASA launch of the Landsat1 satellite in 1972, and since then numerous Earth Observation projects have been launched by numerous public and private space agencies.

In the last decade Proximity Remote Sensing technology saw its great development both with regard to sensors (lightweight multispectral and iperspectral sensors) and platforms (aircraft, balloons, helicopters, RPAS).

The platform is always equipped with a sensor, which can be active or passive. An active sensor emits electromagnetic radiation in the optical region, such as a LIDAR (Light Detection And Ranging) sensor, or SAR (Synthetic Aperture Radar): energy is reflected from the Earth’s surface and returns to the sensor where measurement is done. A passive sensor measures the physical and chemical data of the earth’s surface or the atmosphere on the basis of the reflected solar electromagnetic radiation or directly emitted by the objects in the investigated surface. A passive sensor can be optical or other type, such as those measuring meteorological parameters, air quality or ionizing or non-ionizing radiation. An optical sensor is characterized by the particular spectral region, within the entire electromagnetic spectrum, where the instrument works. The spectral region may include Visible (VIS), Near Infrared (NIR), Average Infrared (SWIR) and Thermal Infrared (TIR). 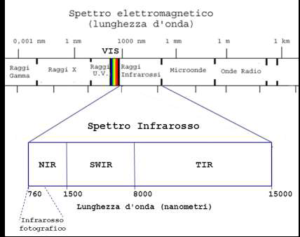 Figure 1 Electromagnetic spectrum in which the infrared regions are highlighted. 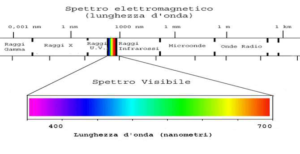 Figure 2 Electromagnetic spectrum in which the visible spectral region of the Visible is highlighted.

The number of its spectral bands characterizes an optical sensor: a panchromatic sensor operates in the visible region, a multispectral sensor provides images at different bandwidths and hence wavelengths, and a hyperspectral sensor is equipped with hundreds of very narrow bands.

The fundamental properties of the sensors are the geometric resolution, defined by the pixel size and therefore the ground information unit, the spectral resolution, i.e. the amplitude and variety of the bands, and the radiometric resolution, that is the sensitivity in the measurement that is able to return. The repetition rate of data acquisition finally defines the time resolution, which depends on the platform and not on the sensor.

MAIA WV is the multispectral camera with 9 sensors designed and developed with bands that have the same wavelength ranges as DigitalGlobe’s WorldView-2 satellite. It consists of an RGB sensor for real-life images, and 8 monochrome sensors with VIS-NIR spectrum sensitivity from 390 nm to 950 nm. Each sensor has a resolution of 1280×960 pixels (1.2 Megapixels) and the size of each sensor pixel is 3.75 μm x 3.75 μm. Monochrome sensors are coupled with band-pass filters that determine undesired wavelengths. 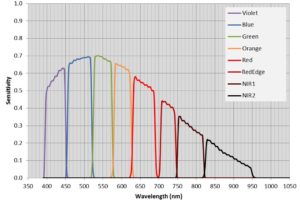 MAIA S2 is the 9-sensor multispectral chamber designed and developed to have 9 bands at the same wavelengths as ESA’s Sentinel-2 satellite. Each sensor has a resolution of 1280×960 pixels (1.2 Megapixels) and the size of each sensor pixel is 3.75 μm x 3.75 μm. Monochrome sensors are coupled with band-pass filters that determine undesired wavelengths. 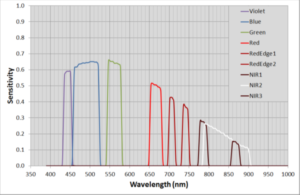 Multispectral survey results are images unaffected by radial and geometric distortion, which present the pixel-pixel coregistration of information for all bands. Through the image processing software acquired with MAIA WV and MAIA S2, it is also possible to operate a radiometric correction of the multispectral data to obtain a repeatable and comparable data even under different light and environmental conditions.

For this reason, SAL Engineering and Eoptis have patented and developed ILS – Incident Light Sensor, an incident light sensor that records incident environmental radiation at every single shoot so that the multispectral data can be radiometrically corrected under the conditions of real and contingent lighting.

Different types of surface such as water, bare soil, or vegetation reflect radiation differently at the different wavelength ranges that define spectral bands: in this sense, the reflected radiation according to the wavelength is called spectral signature of the surface, which is proper and recognizable for certain elements and surfaces. 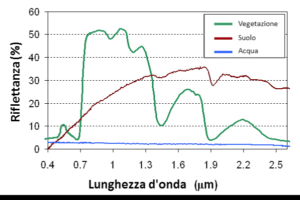 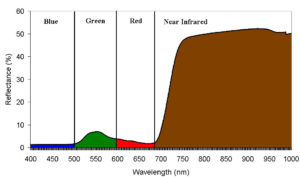 Figure 6 Spectral sign of vegetation in the Visible and Near Infrared region.

It is possible to distinguish the dry vegetation from the wet vegetation, or to investigate the health of a crop by analyzing the curve of its spectral signature.

Dry vegetation does not absorb the red radiation typical of active photosynthesis, does not have the typical Red Edge reflection peak and does not exhibit the high reflection of NIR’s typical radiation incident.

The spectral signature of green plants is very characteristic: chlorophyll in a growing plant absorbs light in the visible, especially red, which it uses in photosynthesis. The near infrared light, on the contrary, is reflected very effectively because it does not serve the plant in any way: in this way the plants avoid excessive heating and evaporation of the lymph.

The vegetation reflection in the near infrared ranges and in the ranges of the visible varies considerably. The degree of difference reveals the extent of leafy vegetation in a portion of an area: in this sense a very important index is the Leaf Area Index (LAI), which is a very useful foliar index in agriculture and in management, for example, of a degraded area that has been regenerated or reclaimed. 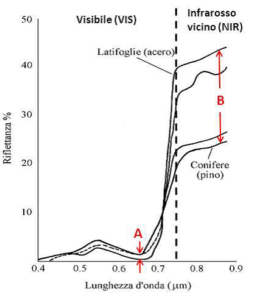 Figure 9 Distinction of spectral reflection characteristics of conifers and hardwoods in the specific region of the Red Edge.

Each plant species and each agrarian culture is characterized by a specific phenological schedule. Multitemporal Remote Sensing allows you to observe phenological evolution during the year, and by comparing and predicting, to implement a plan for the prevention and monitoring of crops and the protection of natural forest, shelter, marsh or mountain ecosystems. 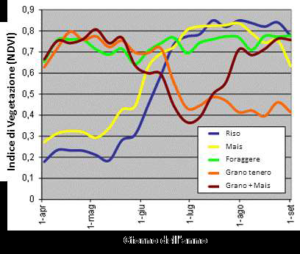 There are also significant differences between different types of soil, in fact the multispectral survey is a large scale survey also used for the classification of geological soil: different mineral and lithological elements for their physical and chemical composition present a definite spectral signature. You can read a summary of applications of multispectral survey here. In addition, as with vegetation, it is possible to distinguish in terms of reflection a soil with high humidity from an arid soil because a soil with higher water content has a higher absorption of the incident and diffused radiation. 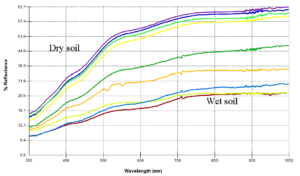 Another very important matrix to be analyzed from a spectrometric point of view is water, whose variations in terms of spectral signature may characterize turbidity, the presence of suspended materials, or even contamination or the unexpected or unusual presence of suspended materials, or excessive or reduced production of phytoplankton in suspension. Generally water has minimal reflection only in the spectrum of the visible, and more precisely in the band of Blue and Violet. The reflection at these specified wavelength intervals allows a certain depth of penetration in the survey below the surface of the water bodies. With MAIA S2, equipped with a bandpass filter set that allows you to capture images at the same wavelengths of the ESA satellite Sentinel-2, and with MAIA in its WV filter set, that allow to capture multispectral data at the same wavelengths of the WorldView-2 satellite, it is possible to evaluate some water quality parameters:

It is also possible to distinguish within the flora in a water body, different species based on different reflection in the wavelengths of Blue and Violet. This knowledge is conducive to the safety assessment in all the exploitation activities that man will be able to implement of that water resource. 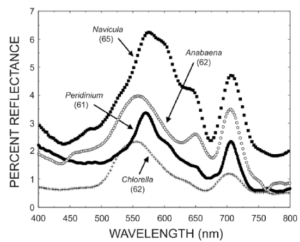 Figure 12 Comparison of spectra reflecting the taxonomies of four different algae in a water body, with almost identical chlorophyll concentration (written in parenthesis and expressed in μg / l).

In this report we also present high-quality scientific applications that the Research Institutes, Universities and Environmental Agencies have successfully tested, adding multispectral survey to well-established survey techniques, and in particular correlating information from precious multispectral data to the information already sought and documented in different fields of investigation of environmental science and knowledge of the territory.

The main measurements that can be obtained through a multispectral survey carried out with MAIA, concern:

With regard to the sensors that SAL Engineering can make fly over the areas of interest, the main applications useful to an Environmental Protection Agency can be:

In the table above, applications of an aerial thermographic survey for environmental monitoring were reported, and we have previously reported the utility of correlating the multispectral data to a surface temperature evaluation of some objects and surfaces of interest. In fact, in the field of environmental protection, the applications of the RPAS thermal relief are numerous and in continuous exploration:

The RPAS thermographic survey has important application and development in the landfill areas, especially if the thermal orthophoto can be correlated with a multispectral orthophoto so as to associate to each pixel and thus to every small portion of the ground radiometric information thermal and multispectral.

The joint multispectral survey, as well as to identify and map the presence of hydrocarbons in the soil, serves to define and characterize the causes of the detected surface temperature differences.

In conclusion, by referring them to the reference environmental theme, below are the measurements and information that can be obtained by means of a survey conducted by SAL Engineering using MAIA optionally matched to a thermographic sensor: